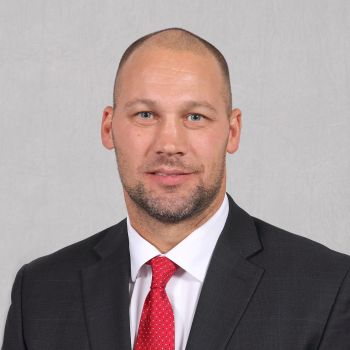 Ben Simon, who was named by the Detroit Red Wings as the 11th head coach in Griffins franchise history on June 5, 2018, begins his eighth season with Grand Rapids and his fifth as head coach. He served the first three seasons as an assistant under Todd Nelson, who served as an assistant coach with the NHL’s Dallas Stars from 2018-22 and was named the head coach of the AHL’s Hershey Bears in the summer of 2022.

Simon’s five seasons as a head coach make him the longest-tenured head coach in franchise history, surpassing Curt Fraser’s four seasons from 2008-12. The 44-year-old Simon guided the Griffins to a 29-27-3-4 record in 2019-20, putting the team in position for what would have been an eighth straight postseason berth before the final 13 games and playoffs were canceled due to the COVID-19 pandemic. His club achieved that franchise-record seventh consecutive playoff appearance during the 2018-19 season by posting a 38-27-7-4 mark (0.572), and he played an integral role in helping the club win its second Calder Cup in 2017. During Simon’s first seven seasons as a coach in Grand Rapids, the Griffins compiled cumulative records of 249-179-23-24 (0.574) in the regular season and 24-14 (0.632) in the Calder Cup Playoffs.

Simon made his NHL coaching debut during the 2021-22 season when he was called up to the Detroit Red Wings to man the bench alongside Grand Rapids assistant coach Todd Krygier, helping lead Detroit to a 5-2 victory over the New Jersey Devils on Dec. 21.

Prior to joining the Griffins, Simon was as an assistant coach and helped the Toronto Marlies reach the postseason in 2014-15 by placing second in the North Division with a 40-27-9-0 (0.586) regular season mark.

In his first stint as a professional head coach in North America in 2013-14, Simon became the second head coach in ECHL history to reach the Kelly Cup Finals in his initial season, as he guided the Cincinnati Cyclones to a 41-23-4-4 (0.625) regular season record – the fifth-best mark in the Eastern Conference – before falling in six games to the Alaska Aces.

Simon began his coaching career as a player/head coach of the Elite Ice Hockey League’s Sheffield Steelers in 2010-11. Competing in the United Kingdom’s top league, he led Sheffield to a 43-10-0-1 record (0.806) and helped the club capture the regular season championship.

Including a second trip to the Calder Cup Finals with Chicago in 2005, Simon has advanced to a professional league championship series a combined five times as a player or coach and won three titles.

A native of Shaker Heights, Ohio, Simon represented Team USA at both the 1997 and 1998 World Junior Championships, earning a silver medal in 1997.

Simon and his wife, Beth, have two daughters, Margaret and Katherine.

*Won Calder Cup
+The final 13 games plus playoffs were canceled due to the COVID-19 pandemic.

++A delayed, shortened and no-playoffs season was held due to COVID-19 pandemic.